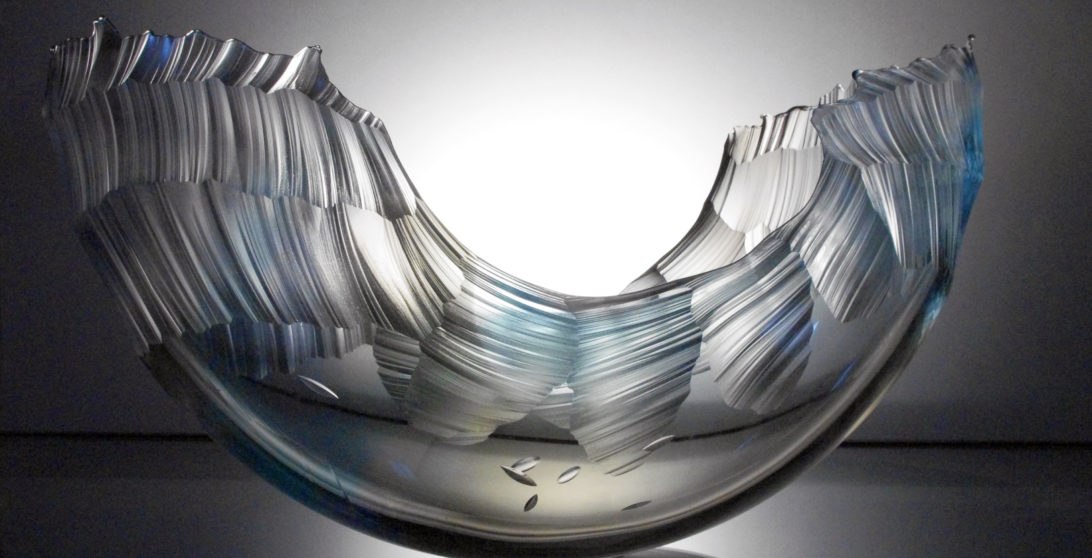 This piece is the end result of both creative and technical developments I have been working on for a number of years. Below is a brief history of the thinking that preceded and culminated in this work.

The first waveform I made came about as a result of my desire at the time to create forms, which better complemented the glass imagery I was currently using. The images were from nature and they took the form of engraved coloured glass shards, which were applied to the solid glass before it was blown into large bowls.

Although the bowls were often quite beautiful, moving onto more interesting sculptural forms, which related in context and combined with the images was the direction I wanted my work to progress in.

Once I had determined how to technically accomplish this, the idea was to create a glass wave captured at the point of crashing down. I wanted the form to convey both the beauty but also the often-frightening power of nature. I wanted this piece to be a warning about man’s negative impact on our environment and so I chose to use the image of the flukes of two diving whales which could be seen through the back of the wave form.

However I was not completely happy with this. The whale image was too distracting together with such a complex form. And the over-use of this image in more ‘chocolate-box’ settings affected the result I was after.

Thereafter I tried changing the scale and the subject matter of the images with some success.

The work on show is my first attempt to concentrate only on the form itself and to omit images altogether.

As the show is entitled ‘Design Collection’ I wanted to use my skills as a glass designer and that meant taking more control over the final form both in the carving stage and the final reheating forming stage.

To better capture the power of the wave I made the piece as big as I could physically manage. I also wanted it to have more height so that the wave is caught frozen just at the moment where its latent energy is at its highest before it crashes. The cutting had to be more even than before as the first pieces were very random, organic in nature. This was technically difficult to achieve but I wanted this piece to be sharper and more graceful.

This work has convinced me that this form does not require the images.